How long should a video be? The right duration for marketing videos

What is the correct length for a video?  The age-old question!

Creating a video with the optimum duration for social media can be a minefield for marketers as each platform and set of messaging is different. There is a myriad of stats around video duration but one of the most beneficial ones to help you tackle durations is that videos under two minutes have the highest engagement. As a rule of thumb let’s start from there as a maximum. From that basis how do you decide how much of that 120 seconds to use up?  Should you use all of it, or stop at 30 seconds? The simple answer is ‘it depends”… but don’t despair. Here are common principles that you can follow and if can look here for how long videos should be on individual social channels.

What is the video for? Know where you are in the sales funnel

Duration will be heavily dependent on where in the sales funnel you’re showing the video. A top of funnel awareness piece will be short, as in 30 seconds or less. This is because it’s likely to have paid media behind it and it will have been pushed into people’s feeds… so they are less likely to give it much time. I would avoid going over 59 seconds when dealing with content at the top of the funnel.

In the middle of the funnel, content can be longer. People know who you are and have probably chosen to watch the content. At this stage, I’d be happy to stretch to two minutes.

The only real reason to go longer than two minutes at any point is at the very bottom of the content funnel, just before pushing for a sale. At this point, you can run longer content such as testimonials and how-to films. These are for a really engaged audience who are keen to know the detail so don’t be afraid to stretch the duration up to 4 minutes. Unless you have a very clear business reason to stretch over 4 minutes I would seriously avoid it.

Video is great for connecting at an emotional level, it is also great telling stories and communicating messages, but people are busy and they are becoming less likely to give you their attention for long. Especially is they are not engaged from the start. To demonstrate this, let’s take a look at a study done by Wisita. This graph shows two films, the green line is a film that this 3- seconds long, the bile line is a film that is 60 seconds long. Looking first at the shorter film. 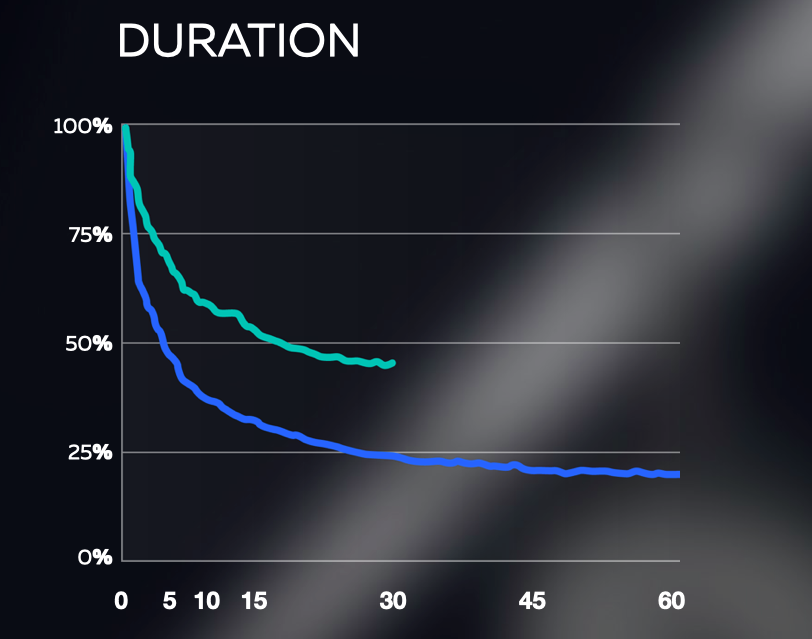 We can see that there is a family first drop off once the film starts, this is the bounce rate of views that realise this isn’t a film they want to watch. Within 5 seconds the film has lost 25% of viewers, and this is followed by a steady drop off until the end of the film. However, the completion rate is just below 50% which is a solid performance. As an assessment, this is not a bad curve at all.

If we then look at the blue line which is the 60-second film, we can see that the initial bounce rate is much higher than the first film. Within 5 seconds we have lost half the audience and this continues to plume down. Drop off finally levels out to leave around 25% and this continues to decline until the end of the film where it ends with 23% of the initial audiences.

Ok, so we can see the two curves, well so what. Well, the crazy thing here is that the first 30 seconds of both of these films is exactly the same. They are performing differently not because of the content but because of their duration. Look at the graph at seconds – the short film has 50% of the audience but the 60-second version has only 25%. People are literally starting the longer film, seeing that it is 60 seconds and not bothering to stay around.