How to get ahead in video marketing, or how UWE student Dan joined Hurricane

Media production jobs are not easy to come by, especially straight from uni. So when UWE Filmmaking and Creative Media student Dan Jones attended a guest lecture from our MD, Jon Mowat, he may not have expected to walk away with work experience leading to a much sought after industry role. 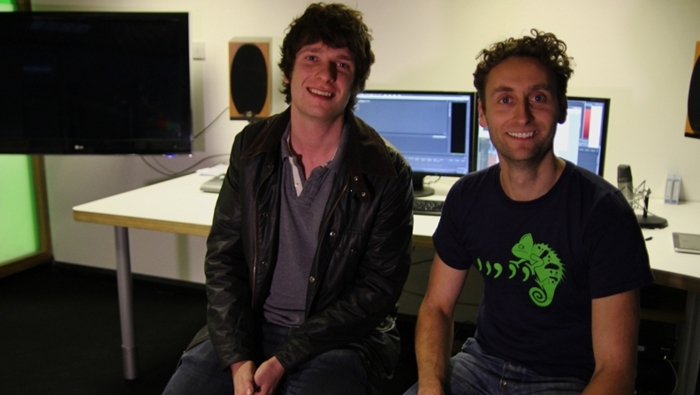 Jon and Dan, now Production and Edit Assistant at Hurricane, were invited back to UWE this week by lecturer Abigail Davies, to share advice on how to make it in the competitive creative industries.

As a student Dan was ambitious, keen to get ahead in the film. He knew that it would be tough, but after watching Jon’s lecture with a video of him scrolling his inbox full of CVs, he really knew just how tough. Jon stressed the importance of work experience and having the right attitude, being polite and helpful (and learning to make a good cuppa).

At the end of the session, Jon offered video marketing work experience on a first come first serve basis. Dan was pumped-up after the talk and rushed to ask Jon about the job. Dan even asked if he could help out with the set-building so that he could get an extra day (using his experience in B&Q to try and improve his chances!)

Dan wanted to work at Hurricane after seeing their showreel and hearing about Jon’s vast industry experience, including with the BBC.

“I think it was also just great to see someone Jon’s age who owned his own media company that produced good stuff and who was so passionate about a job that he was working in.”

Dan enjoyed his first work experience with us at Hurricane, and learned a lot just from a few days of work. Jon kept asking him back for more experience and later paid work. Dan said,

“Jon rang me up to tell me a new position as a camera/edit assistant had become available and wondered if I was interested. Obviously I jumped at the opportunity. It has been great and I feel very lucky to be here.”

A highlight has been working on an advert for Barclaycard at Pinewood Studios where some of his favourite films have been made. He’s really enjoying practising on Hurricane’s new F5 camera too, and has been making a film to demonstrate what he’s learnt so far about camera work and editing.

Jon Mowat said, “I really enjoy meeting students who want to get into the industry, and offer them advice from an industry perspective. At Hurricane, we’re keen to nurture new talent and offer work experience, and we’ve been impressed with Dan’s skills, enthusiasm and his willingness to learn. Dan is a real asset to the team.”

Dan was happy to head back to his student haunts to share what he’s learnt since graduating. His filmmaking course at UWE gave him skills he’s used in working life, and helped him learn how to work professionally and creatively as part of a team. Dan looked back at what his course taught him,

“There were many learning curves that came with each project, whether it was the struggle of working together as a team in itself or organisational skills to handle each stage of the production as it isn’t always straightforward.

Working as a director on the course and the experience I had of casting and working with actors has definitely given me some confidence in working with real clients in the industry. Making the films in the final year gave me the confidence that I could actually make a professional looking film.”

Which future video marketing stars will Jon and Dan inspire this year…?

Chat video with us: