Helmet Cam: our DIY camera for the perfect point of view

No matter how spot on an idea is, if  production values don’t match, a video marketing campaign’s ROI will not live up to expectations.  Great ideas deserve great production to bring them to life.  Recently we produced a video to promote a recruitment competition for AXA. Our concept called for a realistic first person point of view (POV) of a student travelling the world, but we knew it had to have the highest production values possible to inspire its audience and give authenticity to this brand film. In order to do this, we needed to create a camera to match. It meant building some tech from scratch – it took some trial and error but in the end we achieved the right point of view…

For our POV shots, there were several options available such as using small cameras like GoPro.  But these cameras don’t give a filmic field of vision or the filmic look we were after.  It was important to use a camera that shoots in RAW which would allow us the maximum latitude in the colour grade. After researching for a suitable kit, we opted for the Black Magic Pocket Cinema Camera (BMPCC).  This camera also allowed us to mount a range of really good canon lenses via a speed mount adapter. Better glass will always give better results. The BMPCC doesn’t shoot 4K some like other cameras of the same size but that is far outweighed by the image quality. 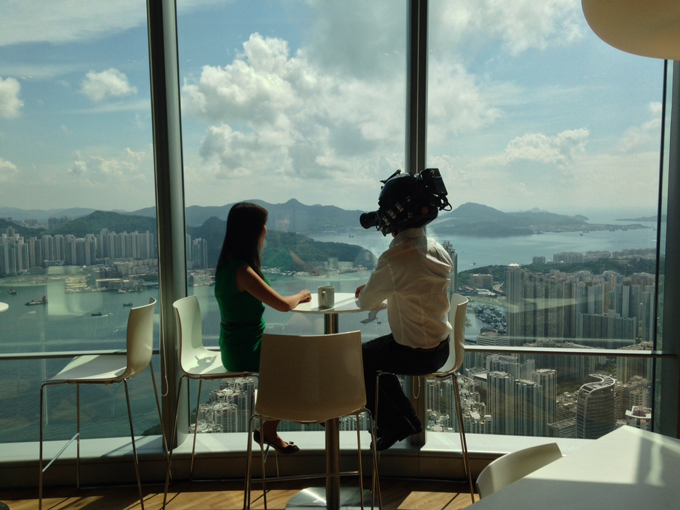 With the camera chosen, we had to work out how to get it on a helmet to give the student’s point of view shots to make the film work for the AXA brand.  In order to get the correct field of view the camera’s film plane had to be as close as possible to the wearer’s eyes. A camera that was too far forward would cut arms of the shots.

How did we do it? We took a number of motorbike helmets and set about them with a hacksaw, magic arm and gaffa tape.  Three helmets later and it was ready to go.

As the camera is so close to the operator’s eyes, they cannot see the screen so we also employed a Lilliput Monitor off axis that could be viewed by the operator, with a loop through for a second monitor that could be seen by the director.  For portability, a helmet mounted V-Lock battery pack powered the camera and the monitor.

The head mounted BMPCC rig is a new camera system which can now be used on future shoots and has so far been used on a short feature and three other online productions.

If you’d like to discuss ideas for a video marketing campaign with us, feel free to get into contact.

Drop us a line: info@hurricanemedia.co.uk